CAT OF THE DAY 054: THE DEATH OF MR LAZARESCU 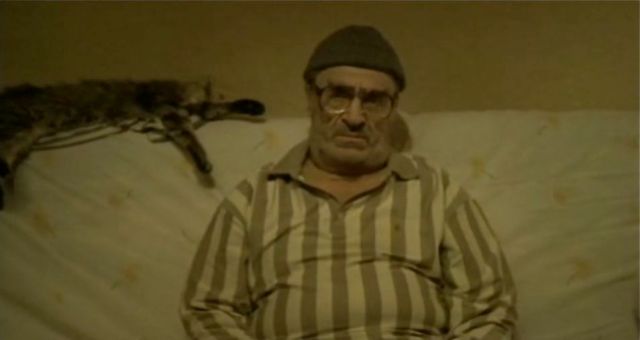 Mr Lazarescu, a 63-year-old widower living with his three cats in a drab Bucharest apartment block, feels poorly. While he waits for an ambulance to arrive, his neighbours comfort him in an offhand way – and complain about the smell of the cats – but aren’t quite willing to accompany him as he starts off on an epic journey through the Romanian health service, in which the staff at various hospitals, inundated with casualties from a traffic accident, repeatedly find excuses not to admit this poor old codger who smells of alcohol.

We don’t really have a chance to get to know Mr Lararescu before he falls ill, but cat-lovers will note that he feeds them and talks to them, so they will give him points for that. Cat-lovers might also worry about who’s looking after the cats after Mr Lazarescu is taken away, to spend the rest of the film being shuttled around between hospitals.

Cristi Puiu’s film, shot docu-drama style with handheld camera, is as much allegory or absurdist black comedy as drab social realism, and though shot through with little rays of compassion, it’s a sad indictment of the way Western society (all Western society, not just Romania) consigns its old folk – and their cats – to the scrap heap.

This entry was posted in Catpanion, Multicat and tagged Cristi Puiu, Death of Mr Lazarescu, Lazarescu. Bookmark the permalink.