A major cat movie. Cédric Klapisch‘s slice of Parisian life stars Garance Clavel as Chloë, a lonely make-up artist who goes on holiday, leaving her cat, Gris Gris, with the neighbourhood cat-minder, only to find when she gets back that Gris Gris has gone missing.

During the subsequent search she forges new alliances and friendships with neighbours, artisans and the dotty old ladies in the quartier. The story’s neither here nor there, though, because as the French title suggests (and the English one doesn’t) we’re each of us looking for our own cat. Yes, this film is one big CATAPHOR! 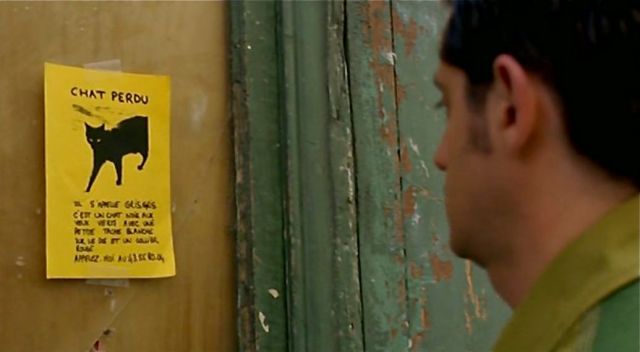 But it’s a cataphor coupled with a fascinating portrait of Paris’s Bastille neighbourhood in the 1990s, and how its status as le dernier cri in boho branchitude was altering its character by squeezing out older, long-established residents who were unwilling or unable to pay silly money for a cup of coffee in hip places like the Pause Café.

The branchitude had faded somewhat by the time I ended up living there seven years later, my own arrival no doubt putting the final nail in the coffin. I was spoilt for cinemas, bars, Japanese restaurants and public transport, and held out for four years before moving away, finally driven to distraction by the yelling of drunken tourists, the stench of urine rising off the trottoirs in the morning, and neighbourhood kids using my narrow street as a football pitch all evening, every evening, all year round.

BIG SPOILER after the picture of Gris Gris!

For those of you who worry about this sort of thing (I know I do) you might like to know there’s a happy ending. Gris Gris is found alive and well. And Garance is no longer lonely.

This entry was posted in A Major Cat Movie, Black Cat, Cataphor, Catpanion, Multicat and tagged Chacun cherche son chat, When the Cat's Away. Bookmark the permalink.