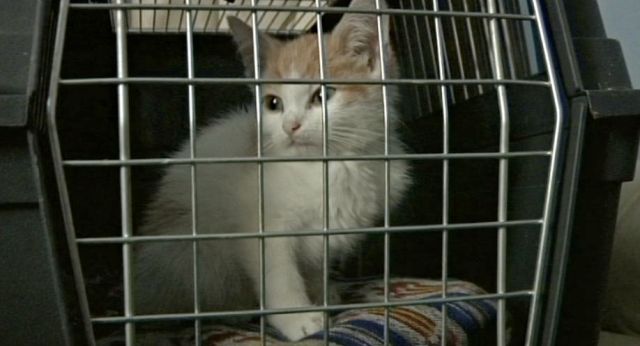 Treacle Jr is the name of the ginger and white kitten in this low-budget mismatched buddy movie written, directed and co-produced by Jamie Thraves, one of Britain’s most inexplicably underrated and overlooked film-makers. His 2009 adaptation of Cry of the Owl, starring Paddy Considine and Julia Stiles, is one of the best Patricia Highsmith adaptations I’ve seen, brilliantly capturing the tone of the author in a way few bigger budgeted productions have pulled off, yet was allowed to go straight to DVD in the UK.

Anyhow, see Treacle Jr. if you get a chance. Tom Fisher plays Tom, a family man from the suburbs of Birmingham who, apparently impulsively, leaves his wife and child and travels to London, where he throws away his phone and credit cards and starts sleeping rough. Aidan Gillen (a long way from his roles on The Wire and Game of Thrones) plays Aidan, a maladjusted Irishman who starts tagging along with him and refuses to be shaken off.

Gillen’s character starts off by being incredibly annoying and, like Tom, you want him to get lost. But as the film goes on, you start feeling protective towards him, especially when he gets a cute kitten, even though his horrible girlfriend is allergic to cats.

It’s an exemplary slice of low budget cinema about a couple of misfits who help each other, performed to perfection by the two leading actors, and expertly shot from the hip by a natural born film-maker who deserves wider recognition.

Also, did I say there’s a kitten?

This entry was posted in A Major Cat Movie, Catguffin, Catpanion, Catscallion, Kitten and tagged Treacle Jr.. Bookmark the permalink.