CAT OF THE DAY 081: WHISPER OF THE HEART

Posted on January 9, 2013 by annebillson

Yoshifumi Kondo was being groomed as a successor to anime genius Hayao Miyazaki at Studio Ghibli when he suffered a fatal aneurysm at the age of 47. His sole feature as a director is the enchanting tale of Shizuku, a 14-year-old schoolgirl whose encounter with a mysterious cat on the Tokyo metro leads to her discovery of  true love, and ultimately nurtures her ambitions to be a writer. It’s one of my favourite anime, and if you haven’t seen it, I urge you to track it down.

The story manages to be simultaneously realistic and magical. Don’t expect fireworks, but do expect a lovely, delicate teen romance, all blushing cheeks and blurted sentiment, as well as one of the most beautiful evocations of everyday life in the suburbs of Tokyo (where I lived for a year) that I’ve ever seen on film. It makes me simultaneously sad that Kondo won’t be making any more movies, but also grateful that he made this one.

It’s a Major Cat Movie. Not only does the cat on the metro (who may or may not be called Moon) lead Shizuku into her adventure, White Rabbit-style, but she also stumbles across a feline statuette called the Baron Humbert Von Jikkingen, which plays a pivotal role in the story.

There is also a smashing version of John Denver’s Country Roads that now makes me cry when I listen to it.

[The Baron returned in 2002 in a semi-sequel, The Cat Returns, directed by Hiroyuki Morita. It’s a lot of fun, though not in the same league as Whisper of the Heart.]

A literal translation of the Japanese title Mimi o sumaseba would be “if you listen closely”.

耳 (mimi) is Japanese for ear. The kanji for it resembles an ear, kind of.

We’ve already met 目 (me, pronounced “meh”), the Japanese symbol for eye. Which looks like an eye, kind of.

口 (kuchi, pronounced koochy) is the Japanese symbol for mouth. And yes, it looks like a mouth! This is a useful symbol if you’re in Japan, because it also forms part of the word for exit: 出口 (deguchi, pronounced “deh-guchi”). So if you see a sign like this… 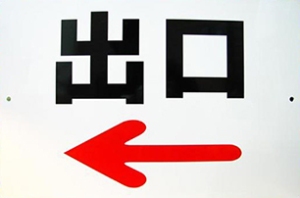 …you’ll know it’s the way out.

There’s another mini-Japanese lesson in CAT OF THE DAY 041.

And I wrote a short article about women in anime for the Guardian a few years ago.

This entry was posted in A Major Cat Movie, Catguffin, Catscallion and tagged Studio Ghibli, Whisper of the Heart, Yoshifumi Kondō. Bookmark the permalink.

2 Responses to CAT OF THE DAY 081: WHISPER OF THE HEART