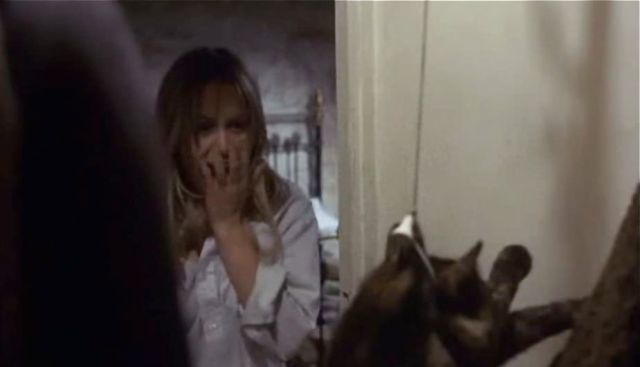 Cats get treated as badly as the female character in this controversial Samuel Peckinpah home invasion classic and its remake. Susan George and Kate Bosworth get slapped around and raped by psychopathic rubes, not long after their cats have been strung up in the closet. “Look,” the psychopathic rubes seem to be saying, “This is what we think of your pussy.”

A horrible ignominious death is a fate endemic to household pets in thrillers or horror movies. And the film-makers rarely deem it important enough to let us know precisely which of the likely perpetrators was responsible; the killing of a domestic animal is simply an early generic indication of escalation of hostilities, the point at which abstract menace passes into physical threat.

SPOILERS after the picture!

In Straw Dogs, cat-lovers are obliged to find solace in the fact that all the likely perpetrators come to a sticky end.

If you would rather see a Peckinpah movie in which the kitty survives, may I refer you to CAT OF THE DAY 000: THE GETAWAY.