CAT OF THE DAY 047: BATMAN RETURNS

Posted on December 4, 2012 by annebillson 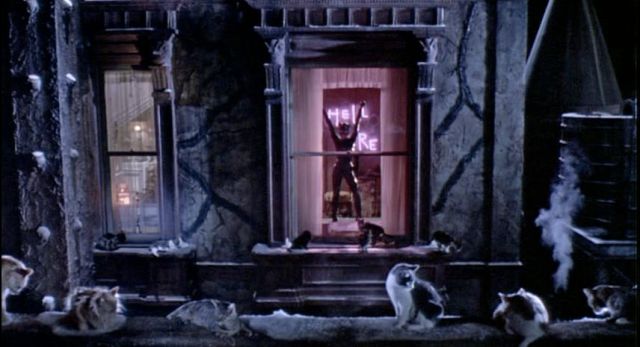 A major cat movie. Downtrodden secretary Selina Kyle has a cat (a black one, called Miss Kitty), a common signifier of the single woman living alone. When Selina gets pushed out of a high window, cats lick her back to consciousness – and, it must be said, look ready to eat her, the single woman’s nightmare fate. You can’t help wondering if the tuna they smeared on Michelle Pfeiffer (and her dummy stand-in) was laced with catnip. 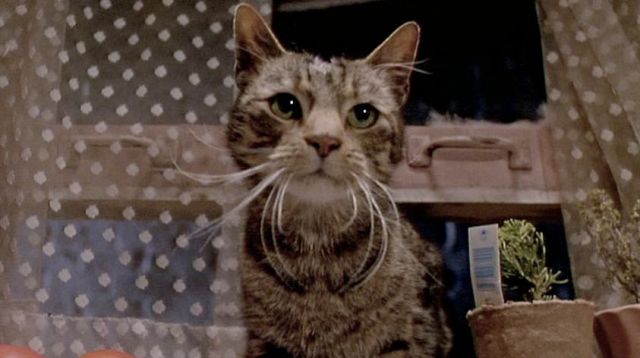 The cats are witnesses to Selina’s transformation into a deadly kickboxing feminist in a skin-tight black PVC catsuit. Miss Kitty is present at her Mexican Standoff with the Penguin, who menaces her pussy with a deadly umbrella while Catwoman is threatening to eat his caged bird. (In this scene, reportedly, Pfeiffer really did put a live bird in her mouth; in a nice realistic touch that no-one would ever dream of reproducing in CGI, the stunt leaves her lipstick just a little smeared.)

And Miss Kitty is back again at the end of the film, when Bruce Wayne picks her up from an alleyway and holds her on his lap in the limousine, knowing instinctively that Miss Kitty’s presence is a hint Selina/Catwoman is still alive.

And there’s, you know, Catwoman herself, a classic example of CATPERSON.

“I don’t know about you, Miss Kitty, but I feel so much yummier.”

Batman bears the Mark of the Cat