Posted on December 1, 2012 by annebillson 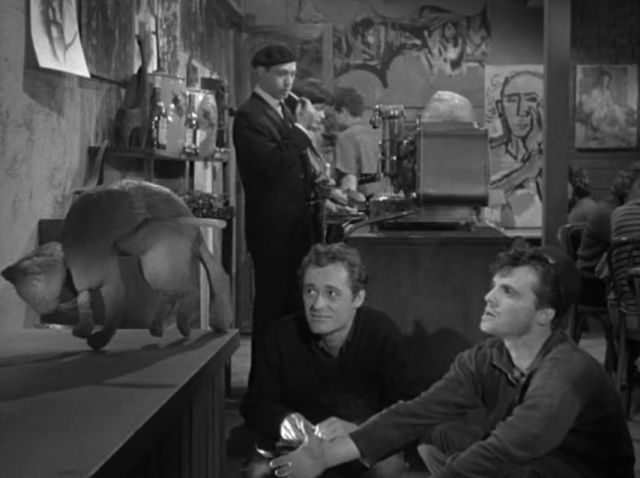 Landlady: “Say Walter, did you see anything of Frankie tonight when you went out?”

Walter Paisley: “I didn’t see him at all.”

Landlady: “Well if you do, tell him I got a nice fresh piece of halibut for him.”

Walter Paisley: “Tell him that? I mean, do you think he’ll understand? He’s only a cat!”

Famously shot in only five days, Roger Corman‘s horror-comedy is the story of the rise and fall of Walter Paisley (played by Dick Miller), a gauche busboy at the Yellow Door café, hip hang-out for beatnik bards.

Walter, who’s a few sandwiches short of a picnic, is desperate to be an artist so he can impress the regulars, and especially Carla (Barboura Morris). He hears Frankie miaowing, apparently trapped behind the wall of his apartment and, trying to set the cat free, accidentally sticks a knife into it.

But instead of disposing of the corpse, he covers it in clay and is fêted as a brilliant sculptor at the Yellow Door. And that’s just the start of Walter’s artistic career…

The production was so cheap they couldn’t even afford and/or didn’t have time to deal with a live cat. All we see is the dead one, and Walter’s sculpture – still impaled by the knife.

But there is quite a bit of miaowing.

This entry was posted in Catguffin, Catrifice, Catscallion and tagged A Bucket of Blood, Dick Miller, Roger Corman, Walter Paisley. Bookmark the permalink.