CAT OF THE DAY 040: A CLOCKWORK ORANGE

Meet Miriam Karlin as Catlady, doing her yoga exercises in a baggy green leotard (this was in the days before Spandex), surrounded by her feline familiars.

She is, of course, doomed. One of the reasons I don’t much care for the films of Stanley Kubrick is his contempt for the female characters, never so obvious as in his film of Anthony Burgess’s novel, where they’re ridiculed, raped and killed. I’m aware that Alex and his droogs have no respect for women, but did their director need to share their misogyny? If you ask me, he enjoyed filming the rape of Mrs Alexander just a little bit too much.

I was going to say that it’s obvious Kubrick is not a cat lover (otherwise we would have had shots of the cats doing cute things, or defending their mistress, the way they do in the book) but then I googled “Stanley Kubrick” and “cats” and immediately found this. 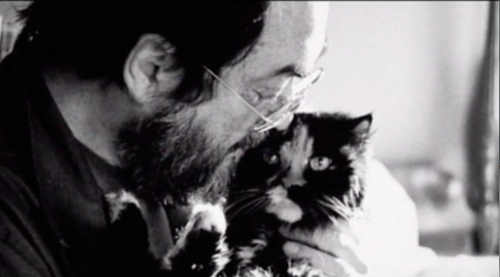 So you never can tell. More pictures here.

This entry was posted in Catpanion, Multicat, White Cat and tagged A Clockwork Orange, Kubrick, Miriam Karlin. Bookmark the permalink.

7 Responses to CAT OF THE DAY 040: A CLOCKWORK ORANGE