Posted on November 5, 2012 by annebillson

A trilogy of Edgar Allan Poe stories adapted for the screen by Richard Matheson and directed by Roger Corman.

Vincent Price, who stars in all three segments, is 1) stalked by his dead wife (Morella), 2) bricked up a cellar by cuckolded dipsomaniac Peter Lorre (in a a comic conflation of The Cask of Amontillado and The Black Cat), and finally 3) dissolves into a puddle of “oozing liquid putrescence” (The Facts in the Case of M Valdemar).

While perusing a film magazine at the age of eight, I came across a still photograph of Price melting in that last segment, and decided it was the most horrible thing I’d ever seen. And yet also the most deliciously fascinating. Here he is with Basil Rathbone: 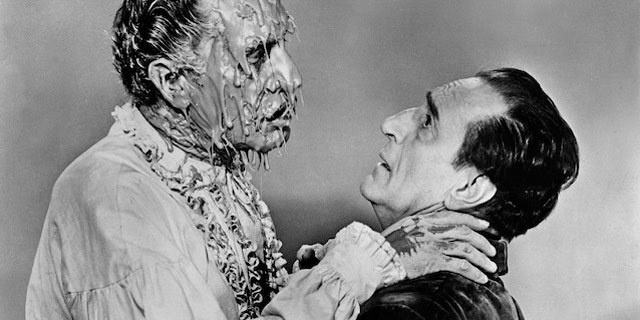 This, I believe, is the film for which the cats in these photographs were auditioning.

For more Vincent Price and cats, see also: CAT OF THE DAY 003

This entry was posted in Black Cat, Catscallion, Catshock and tagged Tales of Terror. Bookmark the permalink.

4 Responses to CAT OF THE DAY 018: TALES OF TERROR