CAT OF THE DAY 091: THE ADVENTURES OF MILO AND OTIS 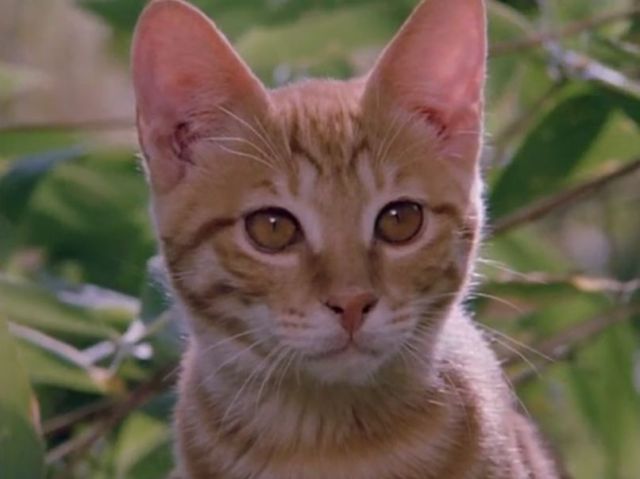 Cute family film, not such a cute behind-the-scenes story. The adventures of Milo, an adorable ginger and white kitty, and Otis, a pug, were originally edited together by director Masanori Hata and his associate director, Kon Ichikawa (yes, the celebrated director of The Burmese Harp and Tokyo Olympiad) from over 40 hours of footage, shot over a period of four years.

The film was re-edited for the English-speaking market, and given a new title, a jaunty score, and a voice-over narration by Dudley Moore. Although the American Humane Society gave its seal of approval, it has since been alleged that over 20 kittens died during production, and that a producer broke a cat’s paw to make it seem unsteady on its feet.

Although such claims have never been verified, it’s clear when watching the film (which I did for the first time only recently) that the cats played Milo are in acute distress at numerous points. For example, swept in a small crate over a waterfall, or threatened by a bear, or attacked by seagulls, or falling (being thrown?) off a high cliff into the sea. Humane film-makers simply would not place cats in these situations.

I watched a few moments of the following clip of out-takes of the cat trying to scrabble back up the cliff (try starting at around 7:52 if you’re in a hurry), and that was more than enough for me. You may be made of stronger stuff. Whether or not any cats were actually killed during production, this is a horrible, horrible film.

(Once again, should I inadvertently make any howlers, I am relying on more experienced linguists to correct me.)

The Japanese title for this film is Koneko Monogatari: 子猫物語. In English – KITTEN STORY.

If you absorbed your mini-Japanese lesson from CAT OF THE DAY 041, you will remember that 猫 (neko) is Japanese for cat.

子 (ko) signifies child (though the word for child in speech is 子供 – kodomo) and you will often see this Kanji added to children’s or girls’ names, as a diminutive suffix. For example, 洋子 (Yoko); 京子 (Kyoko); 玲子 (Reiko); 春子 (Haruko)

物語 (monogatari) is a word you will encounter many times if you are interested in Japanese culture. The first Kanji 物 (mono) literally means stuff or things, and the second Kanji 語 (gatari) literally means language, or words. Put these two kanji together and hey presto! you have monogatari, the word for written stuff, or STORY.

Thus we have the famous film by Mizoguchi Kenji – 雨月物語 (Ugetsu Monogatari), literally Story of the Rain and Moon.

Yet another Mizoguchi classic – 近松物語 (Chikamatsu Monogatari) – A Story from Chikamatsu (the name of an 18th century dramatist), a film better known in English as The Crucified Lovers.

Then there’s the celebrated 11th century novel (perhaps the first novel, in the modern sense of the word, written anywhere in the world) by Murasaki Shikibu – 源氏物語 (Genji Monogatari), The Tale of Genji.

語 (gatari) which as we have seen above can mean either language or words, can also be pronounced as go, as in 英語 (eigo, prounced eh-ee-go) which means English.

So if you’re looking for a Japanese DVD in English, or with English subtitles (字幕) keep your eyes peeled for the word 英語.

This entry was posted in A Major Cat Movie, Catagonist, Ginger Puss, Kitten and tagged KONEKO MONOGATARI, The Adventures of Milo and Otis. Bookmark the permalink.

5 Responses to CAT OF THE DAY 091: THE ADVENTURES OF MILO AND OTIS